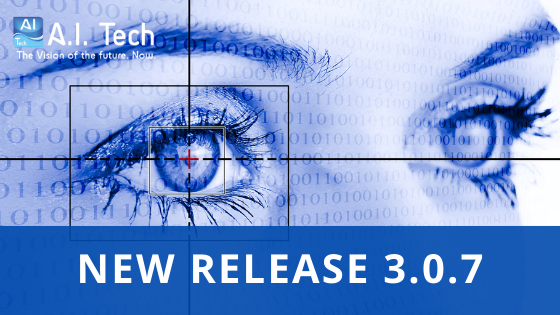 Important innovations in the latest release of A.I. Tech, namely the version 3.0.7.

New products
AI-Violation is finally available: the app, thought for Smart cities, allows you to detect violations of vehicles crossing the stop lane with red traffic light. For vehicles in violation, the app also allows you to identify the type of vehicle and the average speed, as well as the time elapsed since the red traffic light was turned on. The app joins an already substantial series of traffic monitoring products (AI-Road3D, AI-Incident and AI-LPR), thus enhancing the video analysis solution of A.I. Tech for smart roads and smart cities.
To know more: https://bit.ly/3kebXTi
YouTube video: https://youtu.be/gAVEHPCckbE

A new version of the AI-Intrusion app is also available, replacing the previous AI-Intrusion-pro. In fact, this now adds a classification mechanism based on deep learning that allows to distinguish people, animals and vehicles. The app also integrates the possibility of detecting loitering events, previously available in the AI-Loitering app.
To know more: https://bit.ly/3hAh12r
YouTube video: https://youtu.be/3kUUOcofVow

New features
The server version of the applications now allows you to process not only live streams captured by cameras, but also previously captured videos. The AI-Retail-Deep app also integrates heatmap functionality (previously available in the AI-Heat app) and a new and more reliable tampering algorithm is available in all applications, regardless of the specific platform. Where the camera does not contain this natively integrated functionality, all the apps now support it.

Finally, the AI-LPR app introduces two important mechanisms: the ability to manage license plate lists to which access is allowed and license plate lists to which access is not allowed (allow – deny list), for example, to allow the automatic opening of barriers on the basis of the allowed list, rather than for sending alerts in the case of vehicles whose license plate is in the deny list. Another important feature concerns data sharing in a hub-sensor architecture. In fact, rather than uploading the allow-deny lists to each camera, independently of each other, it is possible to upload the list of plates to a single camera and set this as a hub. All the other cameras, acting as sensors, will connect to the hub camera to verify the belonging of a plate to a specific list. To know more: link to the news

The apps are available in the new partner portal, available at the following link: https://help.aitech.vision/home/
Along with the software packages, you will find user manuals and disclaimers in this portal. Furthermore, registering on the portal will allow you to access the AI-Academy, the training course for A.I. Tech products and solutions.
To learn more about the AI-Academy: https://bit.ly/399xdDm